I often read about creationism in the US, and its followers. I tend to find it amusing, and just a little worrying as their numbers are not insignificant. We have plenty of street preachers here in the UK, but until today I have never seen those US-style anti-science […]

I often read about creationism in the US, and its followers. I tend to find it amusing, and just a little worrying as their numbers are not insignificant. We have plenty of street preachers here in the UK, but until today I have never seen those US-style anti-science evolution deniers on the streets. 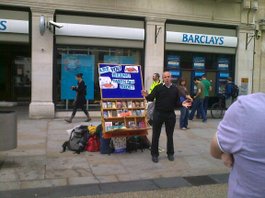 I watched for 10 minutes as I ate my sausage roll, and listened to the standard creationist spiel of how everything must have a beginning and an end, and how everything created must have a creator and how there are no transitional fossils. It was quite entertaining!

Amazing to have that right here in Oxford, a place of learning. There's a natural history museum just around the corner. I wonder if they had ever been?

Jay —
I'm curious as to why it worries you what they think.
Reply to Jay

Will McGugan —
Jay, these are the kind of people who would erode the separation of church and state.
Reply to Will McGugan

That's just the tip of the iceberg.

They can afford to send glossy textbooks, cunningly disguised as science but poking holes and telling fibs about science to every school in the UK.

Shayne O'Neill —
Jay, the reason Creationists, and their slightly more dishonest variant ‘intelligent design’, are bit of a worry, is their tendency to try and get into the schools and political institutions. Thats where it turns from a quaintly silly flat earth thing to an actual threat against the education of children, and the governance of the country.

Go look up “conservapedia” to see just what sort of dreadful rot emerges when the unholy combination of church and state gets involved.

With that said, I'm not overly concerned about the UK, or my own country australia, as both of us dont really have the religious traditions needed to underwrite such sillyness. Catholicism and english protestantism both are more or less science friendly nowdays when it comes to evolution and cosmology (although some flirtation alas with the ‘inteligent design’ gibberish) compared with the evangelical baptist sort of nonsense flying around large parts of the US.

Unfortunately however as the US is a central motor of science, harming science like this , especially medical science (with its foundations on biology and thus evolution) , means these sorts of things actually do impact on our lives even if its a million miles away.
Reply to Shayne O'Neill

Tris —
50,000 years ago human ancestors didn't believe in god, simple because they were not intelligent enough to think of an ‘idea’ like that. Then so called “intelligent” beings came along, and started questioning their existence and invented the concept of ‘God’ and made others believe in it. About 50,000 years later, that is today, again some intelligent beings came along and started questioning the existence of God and figured that there is no ‘God’. So essentially we are heading back to square one, and may be in another few 100s or 1000 years humans of future will completely forget this idea of ‘God’ and will be in the similar state of mind which our ancestors were 50,000 years ago.
Reply to Tris