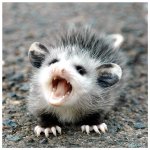 No reason, I just love this little guy. I think I will use a possum as a mascot for my next creation – whatever that may be!

I don't know why people don't like Possums. I wouldn't mind one for a pet.

Here is what Wikipedia has to say on the subject:

Didelphimorphia (pronounced /daɪ.dɛlf.ə.mɔr.fi.ə/) is the order of common opossums of the Western Hemisphere. They are commonly also called possums, though that term is also applied to Australian fauna of the suborder Phalangeriformes. The Virginia Opossum is the original animal named opossum. The word comes from Algonquian wapathemwa. Opossums probably diverged from the basic South American marsupials in the late Cretaceous or early Paleocene. A sister group is Paucituberculata (shrew opossums).